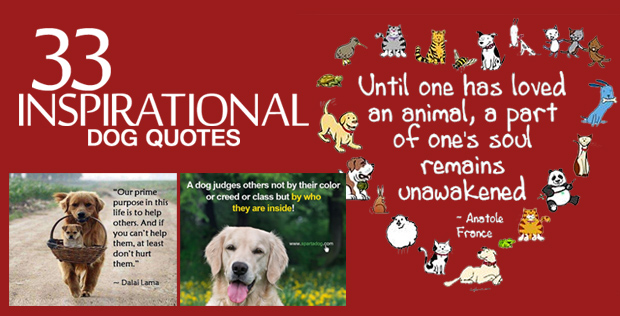 Appreciate the special dogs in your life with these inspirational dog quotes. Tell great words about your pooches using the 33 most popular quotes about the man’s best friend! Pin them on Pinterest to share with other dog lovers!

1. “Our prime purpose in this life is to help others. And if you can’t help them, at least don’t hurt them.” — Dalai Lama

2. “A dog judges others not by their color or creed or class but by who they are inside.”

3. “Dogs are not our whole life, but they make our lives whole.”

4. “If I had a pound for everytime my dog made me smile.. I’d be a millionaire.” — Steph Harris

5. “Whoever said that diamonds are a girl’s best friend.. never owned a dog.”

6. “What a beautiful world it would be if people had hearts like dogs.”

7. “Until one has loved an animal a part of one’s soul remains unawakened.” — Anatole France

8. “They motivate us to play, be affectionate, seek adventure and be loyal.” — Tom Hayden.

11. “Dogs have a way of finding the people who need them, and filling an emptiness we didn’t ever know we had.”

12. “Such short lives our pets have to spend with us, and they spend most of it waiting for us to come home each day.” — John Grogan, Marley and Me

13. “If there are no dogs in heaven, then when I die I want to go where they went.” — Will Rogers

14. “A true friend leaves paw prints on your heart.”

15. “I have found that when you are deeply troubled, there are things you get from the silend devoted companionship of a dog that you can get from no other source.” — Doris Day

16. “Everyone thinks they have the best dog. And none of them are wrong.” — W.R. Purche

17. “Dogs teach us a lot of things but none more important than to love unconditionally.”

18. “A dog is the only thing on earth that loves you more than he loves himself.”

21. “A dog might destroy your shoes but will never break your heart.”

23. “Anybody who doesn’t know what soap tastes like, never washed a dog.”

24. “It’s just the most amazing thing to love a dog, isn’t it? It makes our relationships with people seem as boring as a bowl of oatmeal.”

27. “Animals are such agreeable friends. They ask no questions, they pass no criticisms.” — George Elliot

29. “Puppies are nature’s remedy for feeling unloved, plus numerous other ailments of life.” — Richard Allan

30. “The greatness of a nation and its moral progress can be judged by the way its animals are treated.” — Mahatma Gandhi

31. “Dogs wait for us patiently and faithfully.”

33. “The most affectionate creature in the world is a wet dog.” — Ambrose Bierce

More from my site